As some of the data on our webpage relating to our radios (and a lot of other things too) is a little out of date, we've written up some more current information below. This is eventually destined for the website, so please excuse the officious language!
Up to eight for our radios may be connected and operated using our program.

The number and types of radios to be used must be configured in the Radio Displays Configuration program.

Ticking the appropriate box will allow the main radio program to check for the existence of that particular radio on the USB system and will allow it to be used within FS9, FSX, and P3D.

The radios do not need to be connected to do the configuring. 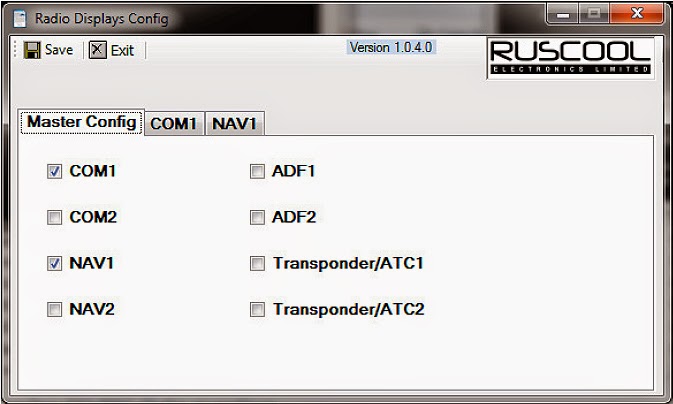 When each radio type is ticked, a named tab appears (you can see COM1 and NAV1 in the graphic above) which allows you to set up to 10 Memory frequencies.
In the graphic below, you can see that it is possible to type in the frequencies you wish to set up in memory. They are not actually held in the memory of the radio, but in a computer file, which our program accesses when required.

The red boxes at the bottom show the Minimum and Maximum frequencies allowable for each particular radio type. The program will not allow you to save values outside of these limits, but it is up to the user to make sure that legitimate values are entered. For instance with COM radios, the second digit after the decimal place can only be 0, 2, 5, 7. (It will not correct them for you!)

These frequencies may be accessed by pressing down the MEM switch on the actual radio. Each press selects the frequencies sequentially, and when the correct one is found, pressing the XFR switch up will transfer the selected frequency into the Active (top) display. 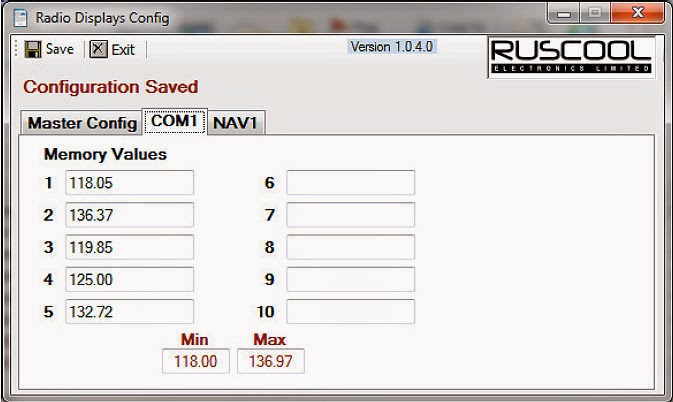 Similarly, with NAV radios, the second digit after the decimal place can only be 0 or 5. Any changes made to the Master Config or the memory frequencies must be saved before exiting. Press the Save button, and the red Configuration Saved message will appear.
Now it is safe to exit the program by pressing the Exit button.

Your flight simulator program must be running before trying to run the main radios program, and also, all of the radios must be connected to their power supplies, and must have their USB cables connected to the computer. It is necessary to wait for at least ten seconds between powering up the radios, and running the main radio program. (It can take a few seconds for Windows to recognize all of the USB devices)
Failure to do all of the above will result in an error message similar to this one:

The radios have an ON/Off switch in the bottom left corner, and it controls only the displays – the radios themselves keep running in the background, so they don’t forget their settings. If the switch is ON when powering up the radios, the microprocessor firmware version number is displayed for a few seconds. When the main radio program is started, the radios read the appropriate Active and Standby frequencies from the flight simulator program and display them according. 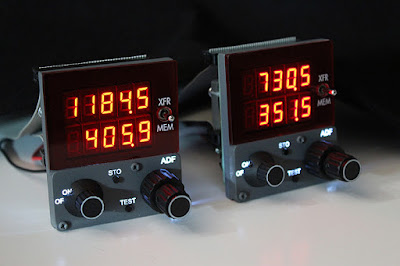 The STO and TEST buttons are dummy buttons only and do not actually operate.

Rotating the two tuning knobs will allow the Standby frequency (lower display) to be set as required. This frequency is sent to the flight simulator program only when the XFR switch is press upwards.

Not all versions of the radios are backlit, but if ordered with backlighting, it can be controlled separately by the user from a separate power source, or it can be connected to the power supply in the radio, which allows it to be turned on and off by the radio’s On/Off switch.
Several slightly different versions of our Collins radios are available, and they can be supplied with either Red or White displays. We can also personalise the faceplate with engraving as necessary.

Some older versions are shown below: 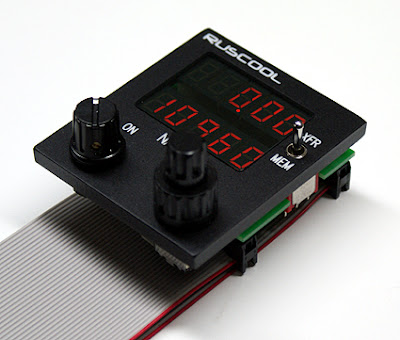 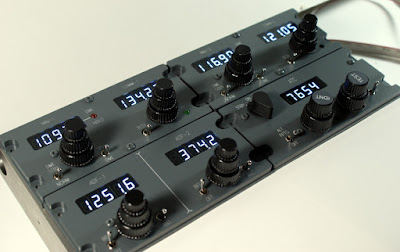 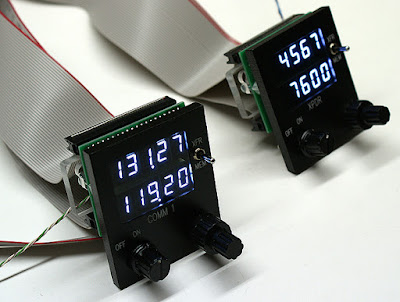 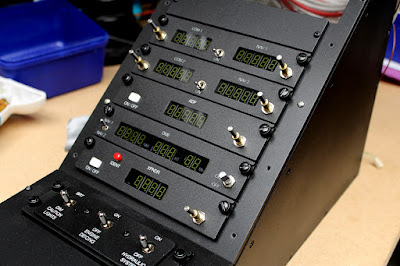 Posted by Ruscool Electronics at 8:13 PM