Further to our recent post regarding the DFC90 Autopilot, below is a short video showcasing the dual-coloured button lights. This was recorded by the new owner of the unit and, by way of a disclaimer, just shows a test harness with the supporting controller and digital logic.

It's always great to see how our parts are eventually used in various projects because often, once they've left our workshop, that's the last we ever see of them!
Posted by Ruscool Electronics at 3:44 PM

This was another interesting project that we recently completed for a customer. Or rather, we completed the front end of this project - our customer is using a Teensy Micro controller and interfacing it to X-Plane 10, so he's doing all of the programming for this himself and has kindly offered to supply the code when he's finished so that these autopilots can be made an immediately more viable option for other builders in the future.

We've said it before but it's true - we have some great customers!

Below is a shot of the unit up close, although it's difficult to see just how vivid the blue and green LEDs actually are. Here they look as if they might be fairly subtle, but in reality they are much brighter and deeper in colour.

The text on the actual panel itself is backlit with a bright white, which due to the way I've focused the camera appears to look a little 'pinkish' beneath the right-hand knob - you'll just have to take my word for it that it's white! 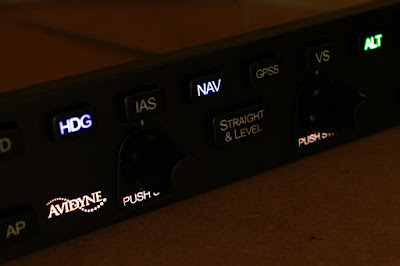 In the dual photo below, you'll notice that the blue and green illumination has been 'switched', in keeping with how a real DFC90 unit operates: "captured" or "engaged" is shown by the associated button glowing green, whilst "armed" is indicated by the blue. We managed to source some custom LEDs especially for this project - which was great!

(Note again the tinge of non-representative 'pink' in the top photo ... tsk, tsk) 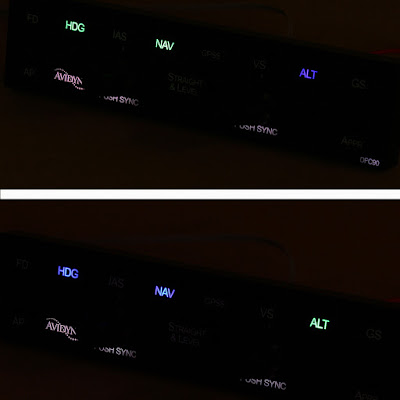 As seen below, we also manufactured and mounted a PCB to the unit so that it's one complete piece and didn't require any assembly once it got to our customer ... other than all of the necessary wiring (which he was happy to do anyway) 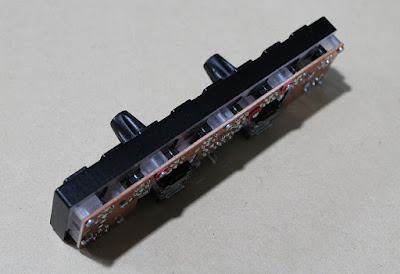 Obviously, to lessen any complication that might have been affected by the PCB's construction, we supplied a full wiring diagram! 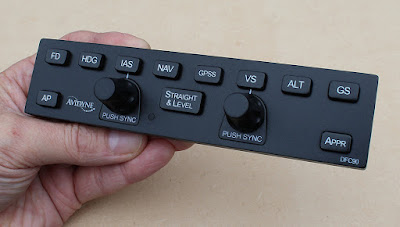 And here's the completed unit, with my hand hopefully providing some sense of scale, which is 1:1 with a real DFC90.

Oh, and a photo of a real unit, for comparison ...

You'll notice also that there's no means of actually securing it to a panel from the front, so we devised a mounting bracket that allows it to be held firmly in place from the rear without creating too big a footprint on the rear of panel, as there are very often other parts nearby whose space also needs to be considered. 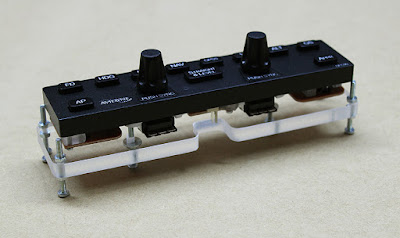 Posted by Ruscool Electronics at 2:00 PM