This dummy HF COMM Control Panel faceplate was made for a customer who didn't actually require an operational radio but wanted something that at least looked the part, and so this was what we came up with.

As much as we can, we like to make provisions so that dummy items can be made functional at some stage in the future if this is required. For this reason, it was constructed using the same measurements that we would use if building a working radio - although there's obviously no circuit board or display fitted to this example. 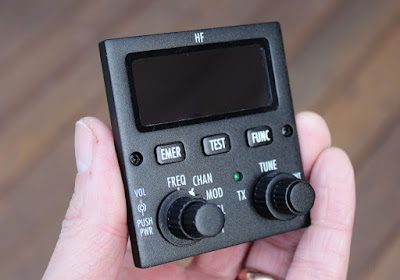 And because we don't know how it might be used in the future, we ensured that the paint is bleed-proof should backlighting ever be needed, and the three buttonheads are similarly constructed and can all be individually removed for re-use. 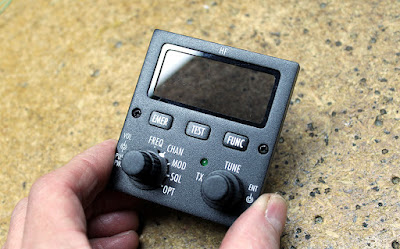 We've previously found that dummy items are just as susceptible to people trying to operate them as functional parts, so we made sure to fit some encoders behind the two knobs - this means that they can be freely turned without causing any physical damage. Dummy buttons are also likely to be pressed, meaning that it's a good idea to secure them in place to prevent frustrated pilots from pushing them through the panel in their efforts to force some reaction! 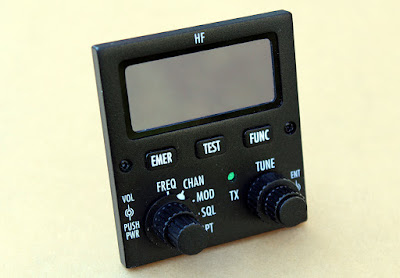 This particular radio was destined for a Cessna Citation simulator, but we've also seen photos of them being used in TBM-900's, which happens to be the next product range that we're currently working on ...
Posted by Ruscool Electronics at 6:29 PM